You are here: Home / Ride It Forward / Amy Petty is Our First RIF Winner

Women everywhere will have a voice in recognizing—and rewarding bicycles to—inspirational women. Together, we’ll build a women’s cycling community that celebrates the joy and transformational experience of cycling, while inspiring others to Ride it Forward. 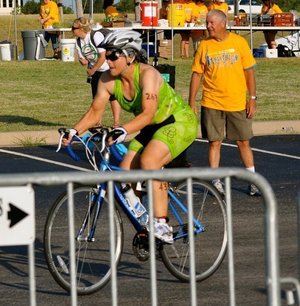 Those of you who follow Terry know we recently instituted “Ride It Forward”, an opportunity to reward a woman who encourages other women to ride through her own inspiring story.  Our very first, and very deserving winner of a Terry Symmetry bicycle is Amy Petty.  She was nominated by her friend, Laura Holt.  I’ve had the pleasure of speaking to Amy and I can’t say enough great things about her. Read Laura’s story about Amy and you’ll understand why:

This is someone I am very lucky to call a friend, Amy Petty. I met her last year on a group bike ride in Oklahoma City. I fell in behind her and immediately could tell that she once had considerable weight, judging from the excess skin on her legs and arms. I didn’t know her name yet, but I was curious. I ended up speaking to another woman that night, who is one of Amy’s coworkers. I found out she is a survivor of the Oklahoma City Bombing.

I was even more curious after that, thinking perhaps she had gained weight after the fact from depression or being bedridden from an injury. The next week during the group ride I made some small talk, which didn’t last long, before we hit 5 miles she was trying to convince me to do a charity ride the next weekend and join her for her first triathlon… in 3 weeks. “I can’t swim either, I just started lessons this week.” She said. By the end of the month, I learned she was 350 pounds when she was buried for over 6 hours, her leg pinned beneath 10 feet of rubble. The remarkable scar on her leg makes it unbelievable she has no permanent injury. She speaks publicly every month, many times, about being a survivor.

This last month her hour-long speech was delivered from a stationary bike. An idea she was so excited about she couldn’t contain herself. I found myself joining spin classes in December for her prep. It was all she talked about, she would speak about taking on life challenges like a hill climb and she hoped people would be inspired by her love of the bike. While over all nutrition and fitness has made a difference in her physical appearance. The bike has given her such joy. It has been a great source of happiness for her and she strives to share that gift with others. She recently invited an overweight woman to join a group ride.

Amy’s joy was contagious; I’ve seen this new woman on two more group rides grinning ear to ear. Amy has an awesome story. She biked across the state, she completed two sprint triathlons, a half marathon, and she bikes to work daily during the spring, summer and fall. She advocates for cyclists, having a close relationship some state government officials, most recently involving a very important bike route bridge that is being resurfaced. If there was ever a woman worthy of recognition for her efforts in cycling, you couldn’t find a better candidate than Amy Petty.

Congratulations, Amy, from all of us at Terry!