You are here: Home / Sidesaddle Blog / Cycling Savvy / Saga of the Stuck Seatpost

If you followed my recent tweets, you know I was obsessed for a while trying to remove a stuck seatpost from one of my favorite rides, “Moo”, a 22 year old hybrid. Last summer, I designated this winter as the time when Moo would shed her tired 7-speed components for something a little more up-to-date. Everything was going according to plan as I tore her down — until I got to the seatpost — which wouldnt budge. What followed was an excursion into part stubborn, part “Im not going to give up on this bike after 22 years”. In the end, everything worked out. The seatpost, in pieces, came out and I experienced a moment of euphoria not unlike Lindsey Vonn’s when she won the gold. 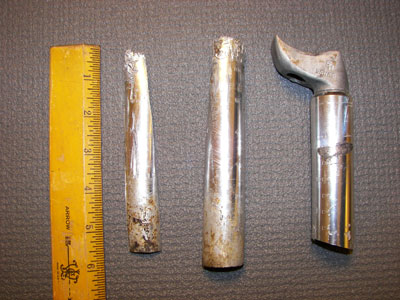 Googling “stuck seatpost” directed me to several good posts, in particular, Sheldon Brown‘s and Lennard Zinn‘s. I exhausted the “easy” solutions first and quickly found myself with hacksaw in hand. My blog, complete with color glossy photos, will tell you how I finally extricated the seatpost. And you should read it before you read the rest of this so things will make sense.

Sometimes you learn as much after an experience like this as you do when you’re in the thick of it. I continued to snoop around the web and talk to some bike mechanic friends about it. Was hacksawing the only way to remove the seatpost? And how did that little 2 mm ribbon of aluminum corrosion around the base of the seatpost lock it in so tightly given that the steel seat tube was very clean, only showing some slight oxidation on its surface?

Some of the best information I found came from Jobst Brandt. I learned that aluminum oxide (corrosion) has more volume than aluminum that has not corroded. So it was as though a larger seatpost had taken over my bike. Like cramming a slightly oversize round peg into a round hole. This explained why the CO2 cartridges didn’t have much effect. The cold temperatures caused the seatpost to contract, but it just wasn’t enough to overcome the effect of the corrosion.

Brandt also mentioned that some shops will Dremel out the seatpost. I think that would require the same kind of finesse with the Dremel tool as it does with the hacksaw. I also wonder how this would work with a long seatpost, like the 300 mm variety so commonly found on bikes with sloping top tubes? In retrospect, that was one thing I did right with my seatpost. When it was new, it was 300 mm long, but I cut it down to 220 mm since I couldn’t see why I should carry around all that extra seatpost when I wasn’t using it.

One of the more interesting concepts on removal came from a friend who spends a lot of time at Kraynick’s Bike Shop in Pittsburgh. He prefers to pull the seatpost straight out of the seat tube. To do this, he’s designed a tool that “hooks” the bottom of the seatpost. Using the top of the seat lug as a platform, he slowly winches the seatpost up:

“I used a length of threaded rod. At one end I put two nuts and tightened them against each other. I took a deep 3/8″ drive socket and cut slits through the socket wall from the nut-engaging end and down about two-thirds of its length. Then I heated and bent the tangs slightly outward. The tangs catch the bottom rim of the seat post but don’t scar the inner surface of the seat tube when the rod is installed. I bored out the square drive hole to a loose fit over the threaded rod and slid it on. I put a pin in a hole drilled through the socket base and the threaded rod. I cut the seatpost off beneath the seatpost clamp and tapped the threaded rod and s ocket assembly into the seatpost. The tangs were bent enough so that they could spring out and get purchase on the underneath of the post. A piece of tubing was put over the the threaded rod and cushioned and rested on the seat tube lug area and a washer was added to create a platform against this tube. Screw on a coupling nut about 1″ long and begin tightening it…”

Okay, if you’ve read this far, you’re probably thinking to yourself, “I hope this never happens to me!” Just make sure your seatpost is greased and check it a couple of times a year to make sure it moves freely. That’s all it takes.