You are here: Home / Sidesaddle Blog / From Georgena / A Chat with Richard Schwinn 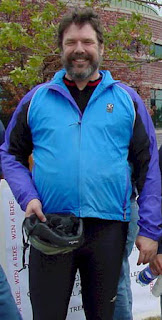 Richard Schwinn has had a long and varied history in the bicycle business, starting out as a mechanic in high school and working all around Schwinn Bicycle Company’s Chicago factory, including a stint building Schwinn’s elite Paramounts in the early 70’s. After a period outside the bicycle industry, Richard returned to Schwinn in the late 1980’s eventually heading up Schwinn’s manufacturing division. When Schwinn was sold in 1993, he and Marc Muller started Waterford Precision Cycles, operating out of the old Schwinn Paramount factory in Waterford, Wisconsin. Waterford is one of the world’s leading builder of custom bicycle frames and is a proud supplier of Terry Precision Bicycles.


All of Terry’s bicycles are built at the Waterford Precision factory in Wisconsin. Recently, Richard and I talked about steel as a material for building bikes. We only had an hour, but some interesting points came out. Enough so that we both plan to meet again to continue the dialog. Here’s how the conversation went: