You are here: Home / Sidesaddle Blog / From Georgena / My Vacation

Late every summer, I meet up with some friends from California and we go on a tour in Vermont with Bike Vermont. This year we chose a new tour that started south of Burlington and made its way into the Champlain Islands. I’ve never been on a Bike Vermont tour that wasn’t super duper, but this one was over the top. Imagine a week on the bike with a tailwind, great weather, eye-popping scenery, quiet roads and sumptuous meals. (Of course, if I’m not cooking it, anything is sumptuous….). The Truth: I like Larry Niles, the owner of Bike Vermont, but he’s not paying me to write this. 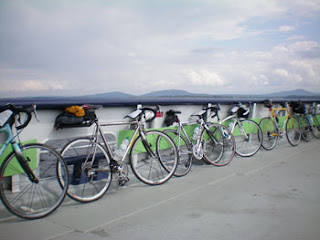 We began in Shelburne, south of Burlington, and spent a day exploring the roads around Charlotte and Ferrisburgh before heading west to pick up the ferry across Lake Champlain to Essex, New York. Now, given that I had left New York to come to Vermont to ride, this did seem like a step backwards, but the relaxation of a twenty minute ferry ride across the Lake (not to mention the free wireless network on the Charlotte side, which made my iPhone giddy) assuaged my grumbling. Indeed, the five mile loop around Essex rewarded me with great views of the Lake and Vermont. The deli in Essex was rumored to be fantastic, but, cheap date that I am, I opted for a row of Fig Newtons and a couple of bananas that I scarfed from the ever-present Bike Vermont van. Returning on the ferry to Vermont (yeah, that feels better), there was time for more exploring around Charlotte before settling in for the night in Shelburne. 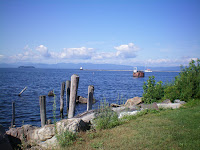 Tuesday showed just how beautifully planned this tour was. We rode from Shelburne onto Burlington’s famed bike path. Getting from Shelburne to the bike path was a little dicey (turn here, turn there, repeat 100 times…) so one leader rode in front of the group and one in back acting as guides through the maze. Then came the piece de resistance. We turned from the bike path onto a narrow three mile causeway (a former railroad bed) across Lake Champlain. 200 yards of the causeway is missing. It was once a railroad bridge, but is now a cut for marine traffic. No problem — a bike ferry took us, 4 bikes and riders at a time, to the other side of the causeway and we rode onto the Champlain Islands. 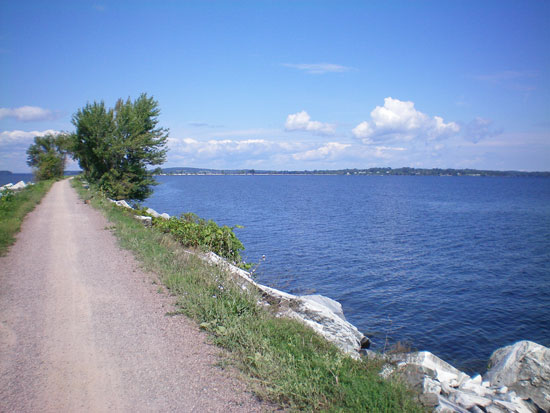 The causeway was amazing — fairly hard packed dirt; just a little soft on the sides. My 23 mm tires didn’t complain, but I kept thinking what a challenge this ride could be on a windy day. Hmmm — it would probably be coming from my left. First I’d bounce off the huge rocks on the side of the causeway and then I’d go in the drink. It was becoming clear that this week was all about water. From this point on, no matter where we were, Lake Champlain was never far away.

Our home base on the islands was North Hero. From there, we explored north and west, in the U.S. and in Canada (as long as one remembered to bring a passport…). The most remarkable riding was on Isle la Motte. It was also the only place where I gave up on the Fig Newtons and had a great sandwich in a little bitty eatery off the back end of a farm in an apple orchard. (“More free wireless!”, the iPhone shouted with glee.) It’s open for about two hours a day. Call me nuts, but I spent the rest of the afternoon simply riding up and down an eight mile stretch of road, taking in views of the Lake, orchards and historic sites.

Within a few hundred yards of each other on a beautifully kept dirt road are two neat stops: the Fisk Quarry Preserve with 450,000,000 year old outcroppings of the world’s oldest coral reefs and a house where Vice-President Teddy Roosevelt stayed in 1901. He was there when McKinley was assassinated. Between The River of Doubt, by Candice Millard and Pelican Island National Wildlife Refuge, I have a soft spot in my heart for Roosevelt.

Isle la Motte has become a cycling hotspot. So much so that the residents have gone to lengths to request that cyclists remember the rules of the road to safely enjoy the island. At breakfast the morning of the ride, we were given a handout reminding us to ride single file, get off the roadway when we stopped and to respect private lakeshore property. Road signs at regular intervals encouraged single file riding; no excuses unless you can’t understand English or French! 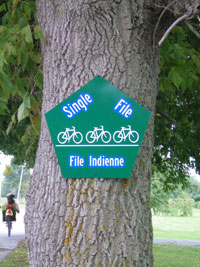 On the following afternoon, we went kayaking in Carry Bay. I don’t do that much kayaking, so it’s a real treat for me to see the world from a different perspective. I must have seemed like a real laggard to the rest of our gang, but I couldn’t be rushed with so much flora and fauna begging for a longer look. I saw several osprey as well as an immature green heron. 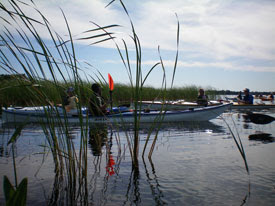 The final morning led us back south, bumping up and over the spine of the lowermost island. A cold front had come through mid-week, so the air was crisp and the views of the Lake were crystalline. We finished up at the Snow Farm Winery where a Bike Vermont van drove us the 40 some miles back to Shelburne.

You know how once in a while you land that perfect ride, when it seems like the bike is doing all the work? When you don’t feel any pressure on the pedals and the miles fly by effortlessly? Imagine five straight days like that! It made it very hard to stop riding! 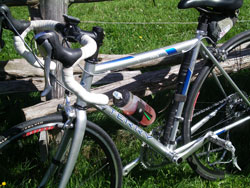 For those who are curious, I rode an Isis Pro with a triple crankset. I used Schwalbe Stelvio 23 mm tires (now replaced by Durano or Ultremo), which were just fine on the well-packed, firm dirt roads we encountered. My on-bike fuel of choice was Cytomax® in the water bottle and Hammer® and Gu® gels in the back pockets. Shorts by Terry and jerseys by Terry and GORE BIKE WEAR™.