You are here: Home / Sidesaddle Blog / From Georgena / The Angst of Spring

Spring is a strange time of year. Hope meets reality and angst ensues. The hope is that upstate New York will finally thaw out as the days get longer. The reality is upstate New York doesn’t thaw out until it’s darn well ready. The angst is if I don’t get a good bike ride in soon, I will surely go crazy. 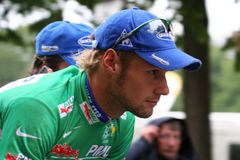 Until that magic day when I leave this icebox to ride in warmer climes, succor comes in the form of bicycling magazines. Though I’m a fitness/sports type cyclist, I love reading about competitive cycling. Somehow, I’ve ended up with a subscription to every cycling magazine. They’re British and American, but I’ve been known to dabble in French and Italian reads as well. As long as the photos are good, who cares what the words say? Some things transcend translation, like Tom Boonen.


My mags tell me cold, wet, muddy weather builds a cyclist’s character. That’s the mantra that will carry me through March and April. And possibly May as well. The pros will soon be taking to the cobbles of Belgium and France and relishing the Spring Classics. It’s all part of the rite of passage on the way to warmer, drier days. It makes me feel better just knowing upstate New York is its own little “Hell of the North”. Could it be that we’re…cool?

And then there will be the tempting rehashes of last year’s races. A glance at what’s to come; blue skies, green fields and verdant forests – the magnificent stage on which a cyclist performs. Now that’s the real thing!


So let the rain fall and greet the scudding clouds with a grin. It’s all part of the natural progression of spring! And flip through a few good magazines while you’re waiting.