You are here: Home / Sidesaddle Blog / Rides of San Diego

I’d heard San Diego was a cyclist’s city. So after a brief appearance at the Internet Retailer convention, I set out to visit bike shops and explore by bike an urban world unknown to me. I assembled my bike out of the travel box at the hotel, packed only the gear essential for an unsupported solo ride, and using Google’s beta Bike Maps, charted two bike friendly routes on my iPod (see links below).

My hotel was on the boardwalk in Mission Beach about 10 miles outside of downtown San Diego.

Day one: Mission Beach to Encinitas. I took the boardwalk north to the end and La Jolla Blvd. This and Torrey Pines Road are nicely set up for the cyclist with bike lanes, but are often four lanes with 50-60 mph traffic. 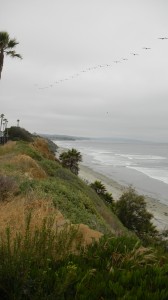 Prepare for a highway hill (gradual but long) climb through Torrey Pines State Park before cresting to a spectacular Pacific vista and downhill to the coastline. Thereafter, the towns of Delmar, where you pick up Coastal Highway 101, Solano Beach and Encinitas are strategically situated, like ancient European fortress towns, on “bute” like hills. Delmar is the luxury beach town. The others, including Mission Beach, are urban boardwalk beachfront with a touch of honky-tonk and a genuine California surfer vibe. You’ll find the friendliest people, surf shops, and creative outcroppings of foodstuff and crafts. I visited Nytro Sports and Bicycle Warehouse in Encinitas. Nytro, the upscale tri specialists, kindly did a quick turn on my flat tire. Danno and Brent (from Vermont) of B&L Bike and Sports, the full service shop in Solano Beach, were well versed in the women’s market.

Day Two: City of San Diego. Yes, you can ride from Mission Beach to downtown San Diego first traveling along West Mission Bay Drive to the Old SeaWorld Highway, now a bike only road that runs along the river. Then take Friar’s Drive, a four-lane highway with a barricaded bike lane, to Fashion Valley Road. Then left at Macy’s, right over the San Diego river and left on Camino del Rio. 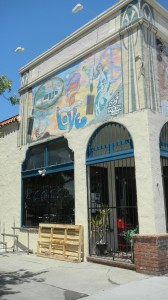 You’ll note traveling inland that the city sits significantly above you. Brace yourself for a holy shit climb up Texas St, straight up a narrow bike lane in four lanes of traffic. Time the busses pulling over to their stops so you don’t have to stop! On top, back track to Adams Ave with a left on Madison and another left on Arizona. Now you are in small neighborhood San Diego – tree covered streets and older cottages with charming gardens. Beautiful vistas look over the inland hills and the ocean. Adams Avenue Bicycles with frescoed exterior is loaded with retro commuter bikes and Andrew, the shop owner, offers an espresso from the service floor. Café 21 next door, with outdoor tables, exotic ice teas, and fruit and leaf salads, is a great lunch spot. CalCoast Bicycles at the corner of Adams and 30th Street is the most inventoried bicycle shop in all the area, but clothing is sparse. Charlie, the owner talks sensible bike business, and Aaron in service remembers Paula and GT when he led the San Diego Bicycle Retailer Tour in 1999!

A short way down 30th Street is Velo Cult Bicycle. 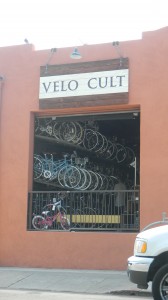 Here, Sky offers customers an Inversion I.P.A. Stationed at his cash register, he told me about 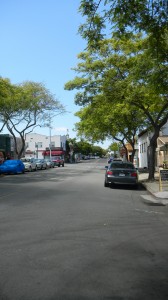 the dozen or so Terrys he has re-marketed – he buys all the small bikes he finds. A few blocks down is Pista Palace, a boutique of expensive European road race machines.  Riding down 30th Street, you get the feel for old style urban riding; no bike lane, buses, cars in anything but single file, but the free spirited vibe of South Park with artisan shops and microbrew pubs is inspiration to go with the flow. At intersections where sports cars line up like the start of the Kentucky Derby, I simply got off and used the pedestrian crosswalk. A right onto quieter Island Avenue with its bike lane takes you up over Grant Hill to views of downtown and a roller coaster descent to the convention center and waterfront.

The city harbor boardwalk going north is crammed with bike cabs (great resource for bike route information) and on the Seaport shopping pier you must walk your bike. The boardwalk turns into a bike path to the Maritime Museum. 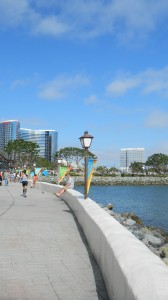 Bike cabbies advocate taking Pacific Coast Highway (with bike lane) from the end of Harbor Drive to the river and catching Ocean Beach bike path west back to Mission Bay Bridge. I took the more scenic North Harbor Drive shoreline bike path past the airport to Nimitz Blvd and Sunset Cliffs thinking I could cross the Sunset Cliffs bridge. 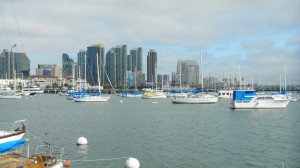 Squeezed between a freeway entrance and this narrow bridge with no bike lane, I thought I had made a big mistake not listening to the cabbies. But looking over the embankment I saw a bike path down below. Sliding down on my ass holding bike overhead, I chose this unmapped entrance to a riverside path with no name that took me back to West Mission Bay Bridge and Mission Beach. As a chamois is good for more than a saddle, I will be sure to submit this finding to Google’s Bike Maps. Still in beta, this new Google feature is remarkably bike accurate for San Diego likely because of tell all adventurers like me. 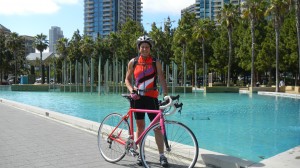