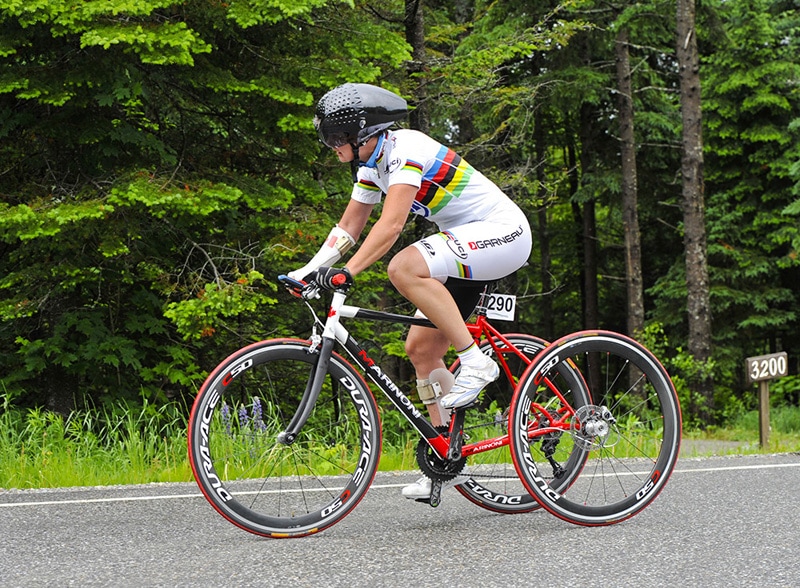 Shelley has twice been named “Road Female Athlete of the Year” by Ontario Cycling Association, earned 12 World Championship Gold Medals , was a torchbearer and Silver Medalist at the Parapan Am Games in Guadalajara, Mexico, and we could go on!

A native of Niagara Falls, Shelley began her love of cycling as a mountain bike racer. After an accident in 2001, she changed out her wheels and has climbed to ever-new heights.

Shelley says her best day ever on a bike was her first ride after the accident on her new race trike. “Hopefully,” says Gautier, “people with disabilities can see me competing, and think they can do it as well”. Through her foundation, Shelley Gautier Para-Sport Foundation, she “actively works to make sports more accessible, and to create programs – around the world – in which people with a disability can not only play the games they love, but work as coaches, trainers and in related jobs”.

Shelley is currently training for the 2016 Paralympics in Rio de Janeiro, Brazil, an eleven day event with more than 4,000 athletes from 176 countries. Her rigorous training schedule to prepare for Rio de Janeiro, up to 5 times per week, is best finished with a sushi pizza.

We are proud to have Shelley as a part of our team and honored to call her our friend.

About the Terry Team: This is a monthly shout out to dedicated Terry fans who are part of our illustrious sisterhood of athletes and adventurers. We ride through wind and rain. We sweat. We dream. We discover. We push ourselves to and past our limits. We take each day and ride it to its fullest. Sound like you? Send your story to customerservice@terrybicycles.com.