You are here: Home / Sidesaddle Blog / YOUR QUICK GUIDE TO THE TOUR DE FRANCE 2019. 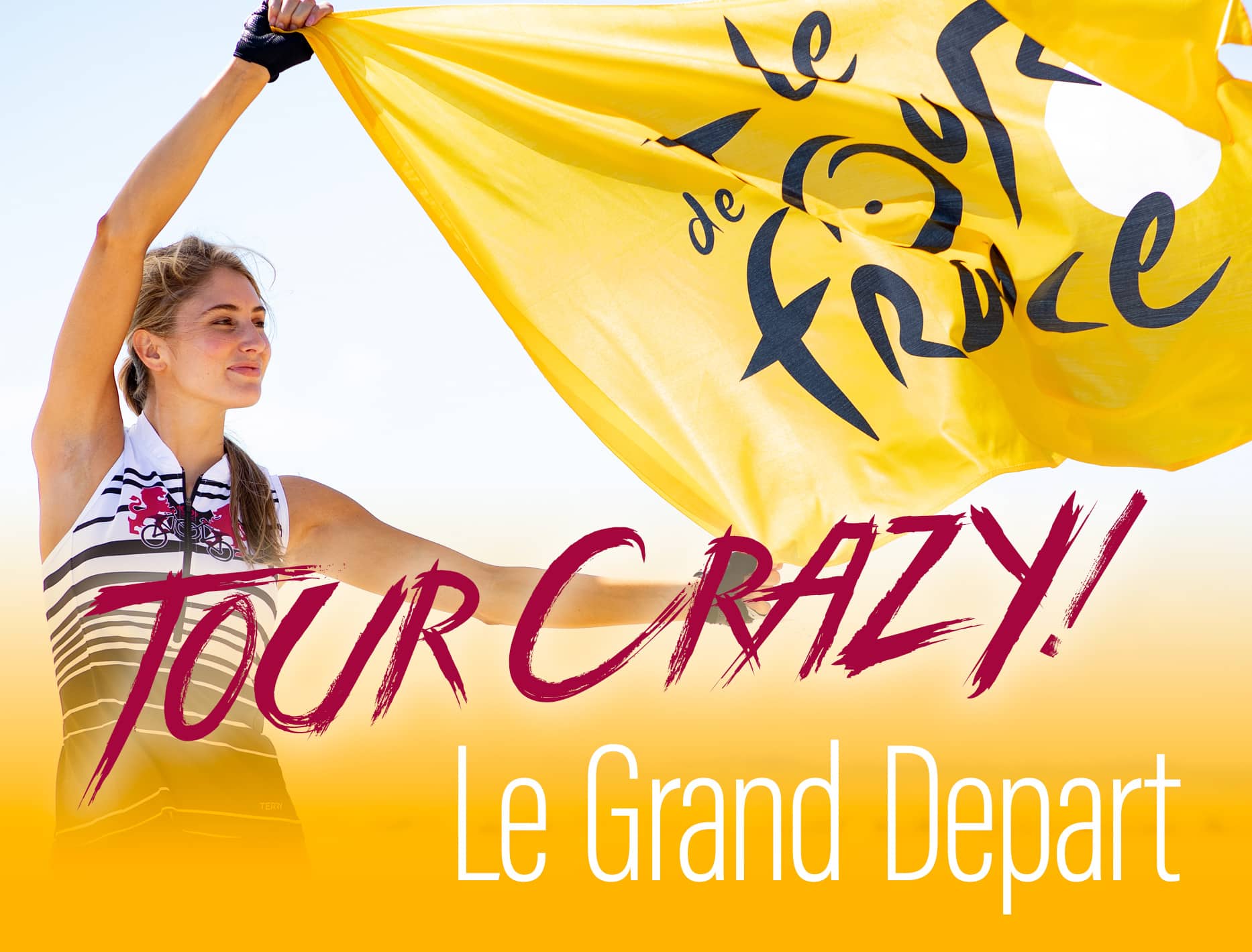 The Terry Mini-Guide to the Tour De France 2019

Features of the 2019 Tour de France

This year’s Tour de France will be among the most interesting of recent years. Not just because the race features some celebrations of notable anniversaries, but because recent crashes have removed several pre-race favorites, leaving the race wide open.

It will be fascinating to see how teams try to take advantage of the opportunities, and which riders emerge to gain the upper hand with some big names sitting the race out.

The first day’s racing gave a taste of the “anything can happen” nature of bike racing.

After the pageantry of Belgian royalty before the start – both King Philippe and King Eddy – Belgian riders made a point to cross the line first on the sprints and climbs of the day, so Belgian rider Greg Van Avermaet is wearing the Polka Dot Jersey going into Stage 2. It was Dutch rider, Mike Teunissen, who took the stage win, edging out Peter Sagan by a rim.

Teunissen got his chance when a crash in the final Kilometer took out his team leader, Dylan Groenewegen, along with half the peloton. He was supposed to be part of Groenewegen’s lead out train (more on those in a moment), but rose to the occasion with a perfectly timed effort.

What are the dates for the 2019 Tour de France?

A special Grand Départ in Brussels on Saturday July 6, 2019

This year marks the 50th anniversary of Belgian legend Eddy Merckx’s first Tour de France win. The race honors him by spending two days in his back yard in Brussels. Both the first day’s road stage and the second day’s team time trial pass through his childhood home, Woluwe-Saint-Pierre.

A milestone for the Maillot Jaune

This year’s Tour marks the 100th anniversary of the Yellow Jersey. Spectators and press had trouble identifying the leader of the race in the early days, and the Yellow Jersey was a creative solution – yellow because of the Tour sponsor’s Newspaper was printed on yellow paper. It became one of the greatest icons in sport.

To commemorate, each stage of this year’s Tour will feature a unique Jersey design, including motifs from the history of the race.

The Highest Tour de France ever

This year’s race includes more mountain-top stage finishes and at higher altitude than any previous edition. Climbing ability is always required for the winner, this year it will count more than ever. This will be fun to watch too, with the possibility of dramatic gains and losses on exhausting climbs and high speed descents.

Following a familiar format, the first week features mostly flat or hilly stages, entering the Pyrenees in the second week and the Alps in the third.

As always in the tour, the flat stages provide the exciting spectacle of closely contested sprint finishes. Toward the end of each of these stages, teams organize into lead-out trains, where several riders use each other’s slipstream to lead their star sprinter into the closing kilometer. Each train maneuvers for position to give their man the best advantage at the front of the race. The rider at the front of each train gives all he can then peels off for the next rider to take over, until with a few hundred meters to go it’s all down to the final sprint. Always an amazing display of power and technique.

Stage 1 for the spectacle and first glimpse of potential for the rest of the race. Stage 2 is a team time trial, and apart from the interesting race format with high tech gear, high speed teamwork, and lots of suspense, the result can give an early strategic advantage.

This looks like a mostly flat stage made for the sprinters, but the last section packs a punch – three short but significant climbs in quick succession will give the advantage to riders who can both climb and sprint. Team strategy will certainly come into play, and with fresh legs this will be a very competitive finish.

The first mountain stage, with four serious climbs and some steep grades to overcome. This stage has the potential to create big enough time gaps to end some riders’ hopes of overall victory early, and decide who the group of final contenders will be.

A hilly stage over roads and climbs that will make it hard for the teams to organize and control position. That means breakaway riders may be able to stay far enough ahead of the peloton for more strategic time gaps to be opened.

Placed midway through the race, this time trial will not likely decide who wins overall, but may well eliminate contenders who are not exceptional against the clock.

Into the Pyrenees, and the first of the mountain-top finishes with potential for a GC (General Classification) leader to make their big move, though still a little early in the race to be truly decisive. The finish is atop the Col du Tourmalet, and will be spectacular.

Three days at the end of the Tour, where the length, steepness and succession of climbs will sort out the final winner and put victory out of reach for the rivals. The Alps stages are always full of dramatic racing, heroic efforts and tragic setbacks – enormous fun to watch.

The spectacle of the mostly ceremonial closing stage, against the backdrop of Paris looking its best. A last chance for the sprinters still in the race to put on a show.

One of the strongest contenders to win any Tour de France is a rider who has won before, especially the previous year. That gives them a psychological edge – everyone knows they are capable of the endurance and versatility needed to dominate the race, and their team has the depth to get the job done.

Who is favorite to win the 2019 Tour de France?

That would make last year’s winner, Geraint Thomas, the default favorite, but he hasn’t been in the limelight much this year. He placed well in the Tour de Romandie, but crashed out of the Tour de Suisse, which leaves question marks over his strength and readiness for the Tour de France.

Thomas’s team mate Chris Froome would have been another man to watch very closely. As the winner 4 times previously he is more than capable, and their team Ineos may have been able to allow one or the other rider to take the lead depending on their performances and the events of the race. It’s not on the cards for 2019. Froome crashed badly in June, breaking multiple bones, and is now facing a long recovery.

Froome’s absence means Vincenzo Nibali is the only other previous Tour de France winner in the Tour. He took the Yellow jersey back in 2014 – does he still have what it takes?

The Netherlands’ Tom Dumoulin won both time-trial and mountain stages in previous Tours de France, proving himself to be a strong contender this year. Unfortunately he crashed out of the Giro D’Italia, and was unable to recover from his knee injury in time for this year’s Tour.

Three riders have racked up impressive recent performances, indicating strong form going into the Tour: Jakob Fuglsang, Mikel Landa, and Egan Bernal. The last 2 guys played key roles supporting Chris Froome’s Tour de France victories. Now they are all showing the strength and experience to be GC contenders in their own right, and Bernal has been named co-leader of the Ineos Team with Thomas.

Roman Bardet, Thibault Pinot, and Adam Yates were all outstanding young riders, all finishing on the podium or close over the last few years with impressive stage wins. This year we may see if one of them can break through to the top spot, or if the earlier achievements were in fact their high marks.

Nairo Quintana has few rivals in the mountains but has been at a disadvantage to Froome especially in time trials. Richie Porte put in outstanding rides in support of Froome’s previous Tour de France victories and is clearly strong enough to win himself, but has had some very bad luck with crashes. If things go well for them, both could have a great race.

Ever popular because of his dynamic racing performances and charismatic personality, Peter Sagan is defending his Green Jersey from last year. If he wins again he will have won it more than any other rider, but he hasn’t had a great year so far.

The list of riders who could be poised to prevail is a long one, but I think one more rider is worth watching especially closely for Tour de France 2019: French rider Julian Alaphillipe is a Tour de France stage winner, was last year’s King of the Mountains winner and ranked well in sprint points (strong indicators of GC capabilities), he is maturing in a strong team, and has had a great year. Could this be his Tour?

What’s the best way to follow the Tour de France 2018?

Podcasts and live streams are a great way to miss not a moment – see a couple of favorite options here.

NBC has the broadcast rights in the US, and offers an app that does a great job of keeping you in the moment, with live coverage and lots of stats.

A new paid live streaming option is Fubo, with a free trial that will get you through a good part of the race.

If you’re looking for a good free option, the official Tour de France site is a great alternative, with a free mobile app so you can get the live feed on the go.

We’re mostly bike and/or race nuts here at Terry, so it’s hard not to be immersed in the Tour. The live feed coverage is a great way to keep a handle on the progress of the race and still get your work done – not as immersive as video but you can still experience the drama and strategy as the stages unfold.

Stay tuned – it’s going to be a great race!

Round up of key stages of the first week of the Tour de France 2019.

Highlights of key stages in the second week of the Tour de France 2019.