You are here: Home / Sidesaddle Blog / CYCLING DON’TS FOR WOMEN. 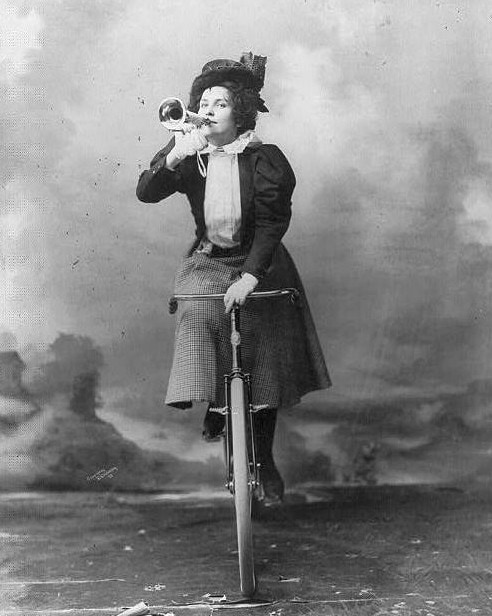 Photo: Courtesy of The Library of Congress

The bicycle has long been heralded a vehicle to freedom, and particularly, a woman’s freedom. At the end of the 19th century, it was an extremely polarizing disturbance, not only for the transportation independence it provided women, but for the revolution in a woman’s dress that it precipitated. In honor of Bike Month, we thought we would take a trip down memory bike lane and share a list published in 1895 by New York World with 41 ‘pointers’ for female cyclists:

Don’t be a fright.

Don’t faint on the road.

Don’t coast. It is dangerous.

Don’t boast of your long rides.

Don’t refuse assistance up a hill.

Don’t neglect a “light’s out” cry.

Don’t wear jewelry while on a tour.

Don’t race. Leave that to the scorchers.

Don’t imagine everybody is looking at you.

Don’t go to church in your bicycle costume.

Don’t contest the right of way with cable cars.

Don’t ask, “What do you think of my bloomers?”

Don’t use bicycle slang. Leave that to the boys.

Don’t go out after dark without a male escort.

Don’t go without a needle, thread and thimble.

Don’t try to have every article of your attire “match”.

Don’t let your golden hair be hanging down your back.

Don’t scratch a match on the seat of your bloomers.

Don’t discuss bloomers with every man you know.

Don’t appear in public until you have learned to ride well.

Don’t overdo things. Let cycling be a recreation, not a labor.

Don’t ignore the laws of the road because you are a woman.

Don’t try to ride in your brother’s clothes “to see how it feels.”

Don’t scream if you meet a cow. If she sees you first, she will run.

Don’t cultivate everything that is up to date because you ride a wheel.

Don’t emulate your brother’s attitude if he rides parallel with the ground.

Don’t undertake a long ride if you are not confident of performing it easily.

Don’t appear to be up on “records” and “record smashing.” That is sporty.

Reproduced from a lovely article by Maria Popova at Brain Pickings.