With the season upon us, I’ve been hearing from a lot of you who are thinking about purchasing a new bike and wondering about 650 wheels. Like Terry, many other WSDs use this size, front and rear, on their smaller models.

In a nutshell: “If the shoe fits, wear it!”. Don’t shun a properly fitting bike because it has 650 wheels.

What are the main objections to 650 wheels? I can think of a few: they don’t go as fast, small wheels have more rolling resistance than larger ones, tires are harder to find, and 650s are not supported in road races. Let’s see which of these have any merit.

Small wheels have more rolling resistance.
What is rolling resistance? It’s one of the things that can slow a bike down. It’s caused when the tire deforms, which it does as it revolves. This happens where the tire is in contact with the ground. If you could put the bike on a sheet of glass and look up at it from below, you’d see the oval contact patch — where the rubber meets the road, so to speak. If you inflate a 650c and 700c tire to equal pressure, the contact patches will have the same area for the same rider weight. But more of the “roundness” of the smaller diameter tire is lost during deflection. This deformation ultimately causes more rolling resistance. 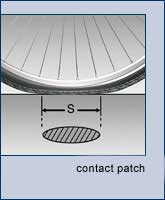 Tire Availability
Just about everyone has a 650c tire – Schwalbe, Continental, Michelin, Panaracer, Vittoria and Terry, to name a few. With so many WSDs and tri bikes using this size, there’s no shortage of supply. According to Schwalbe tires, demand for the 650c size is increasing.

No Race Support
Yes, this is correct. According to our team riders, the 650 size is rarely supported and, when it is, you really have to dig around in the wheel van to find it!

Thanks to Schwalbe Tires for the use of their graphics!