It must be the mechanical engineer in me — when I started reading about Rotor’s Q-Rings, I was fascinated. To the point that my desk is littered with all kinds of studies and evaluations of this and other renegade chainrings.

Not that they’re new — oval and elliptical chainrings pop up all the time. Here’s the basic concept: the oval shape changes the effective gearing. The drawing below will help you visualize what’s going on. Imagine a round chainring (black) that has 50 teeth. If we reshape it into an oval (red), then it behaves like a chainring with more than 50 teeth when it’s in the position shown in the drawing below. As it rotates 90 degrees, it behaves like a chainring with less than 50 teeth. Kind of like changing gears without changing gears… 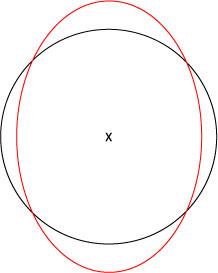 The most well-known oval chainring was the Biopace™ chainring from Shimano. The design of this ring attempted to relieve knee stress by changing velocity at different points in the pedal stroke by the way the oval was aligned with the pedals. The BioPace chainring was aligned just like the chainring in the drawing, slowing down the speed of the legs at the top and bottom of the stroke and discouraging hard pedaling in the middle ranges. In theory, this was easier on the knees, which are most stressed out when the leg is at a 90 degree angle.

The older, elliptical chainring was aligned with the “fat” part of the oval in the horizontal direction to take advantage of the rider’s power when the pedals are in this position, but it put a lot of stress on the knees and contributed to a jerky pedal motion.

In 2000, the “Osymetric” chainring was introduced. It’s neither oval nor elliptical, but uses two different kinds of curves, giving a constant change of radius, according to the designer. These rings were seen most recently in the Giro d’Itaia on Bradley Wiggin’s Felt DA team time trial bicycle.

The Rotor Q-Rings™ are yet another play on the chainring egg game, with the added advantage of being able to tweak the orientation of the rings relative to the crank arms in order to maximize their effectiveness. Every rider’s pedaling style differs slightly, so it makes sense for the rings to be set to take advantage of this. In order to know exactly how to adjust the placement of the rings, the rider should have a Spinscan™ done to analyze her pedal stroke. There were several university studies done about the Q-Rings demonstrating that they may help a rider develop more power with a lower heart rate.

Well, this is a lot to digest and probably raises more question than it answers, but it does make you realize that what seems so simple — namely, your feet making little circles — isn’t so simple after all. Add your legs to the equation and now you have a piston-like action mixed in with a circular motion. What if one leg has a different pedal stroke than the other? And how does this entire “linkage” change when you move back and forth on or in and out of the saddle? Plenty to think about on your next bicycle ride!