You are here: Home / Sidesaddle Blog / Cycling Savvy / It’s Not About the Wheels

Recently I read a forum posting in which the writer stated she preferred 700c wheels to 650c wheels because she sat higher on the bike and felt more on a par with riders around her. She may have felt this way, but it had nothing to do with wheel size. Something else was going on.

On first take, you might think the larger the wheel, the higher the bike. Seems logical, but it’s not. Whether a bike is being designed around 700c, 650c, 650b, 24″ or 20″ wheels, there’s one dimension that usually doesn’t change much — the bottom bracket height. It’s the distance from the ground to the center of the bottom bracket, the “central movement” according to the Italians. It’s where the crank arms meet the bicycle.

Here are two drawings showing our hypothetical rider on bikes with 650c and 700c wheels. The distance to the saddle from the pedals is identical as are the “cockpit” dimensions. Two drawings are worth six words: “it’s not about the wheel size.” 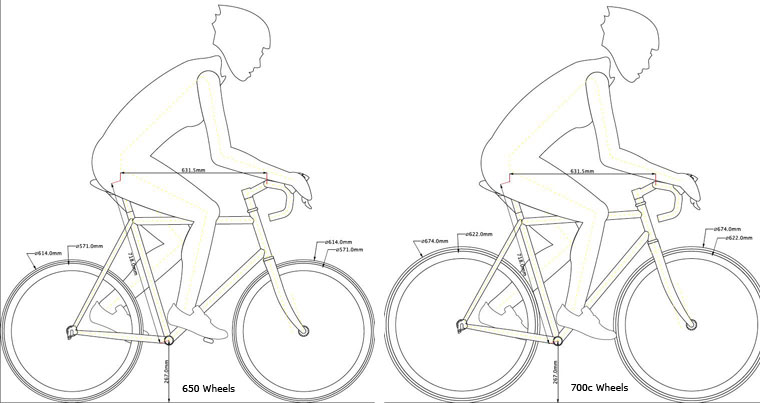 So why does this rider feel taller on the 700c bike? Well, one reason might have to do with the seat angle on the bike. If the 700c bike has a steeper seat angle than the 650c bike, she will ride higher in the saddle. Imagine a 90 degree seat angle: she would be sitting really high! There are a lot of 700c bikes for women built with steep seat angles in order to make the top tubes shorter, so that might be one of these bikes. (Not the right way to do it, by the way…)

Or perhaps she’s riding with different “cockpit” dimensions. If the reach to the bars is shorter, the stem is shorter and/or the stem is taller, she will sit more upright. Taller in the saddle. And back to the bottom bracket height — it may indeed be higher on the 700c bike.

Lots to think about here. One of the most important is that wheel size is one of many tools available to bike designers so we can give our riders the best fit possible. The bike is a wonderful work of engineering and art whose pieces are remarkably intertwined — as much with each other as they are with you, the cyclist.