You are here: Home / Sidesaddle Blog / Cycling Savvy / The Good, the Bad and the Ugly

This eLetter is about challenging our perception of the definition of a “good” bike. I thought a visual presentation of how we regard bicycles would be cool way to put things in perspective. So I’ve come up with a grid to illustrate my point. Even if you shun math, I think you’ll find this very palatable. We tend to evaluate bikes based on their weight and stiffness. So one axis on the graph is for weight, the other is for stiffness. Simple.

Let’s begin with “ugly” bikes. Most riders would agree that a bike that weighs too much isn’t a good thing. There are pros and cons to that argument, but for now, let’s just assume that we’re talking about a tank, not about a bike that weighs 16 pounds or even one that weighs 23 pounds. The bike we’re concerned with is a boat anchor! And not only does it weigh a lot, it’s really stiff. Every piece of grit on the road feels like a boulder. The constant chattering from the road wears the rider down. Here’s where that ugly bike would fit on my grid: 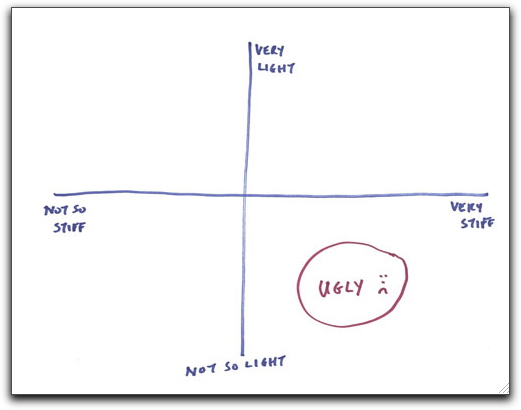 I think we’d all agree that even if we gave this ponderous bike a little more flexibility, it would improve slightly since the it wouldn’t rattle our bodies as much as its stiffer counterpart, but it still wouldn’t have that “lively” feel we’d like. So, I’ll call this bike “Bad” since it still doesn’t achieve the ride I’d like. 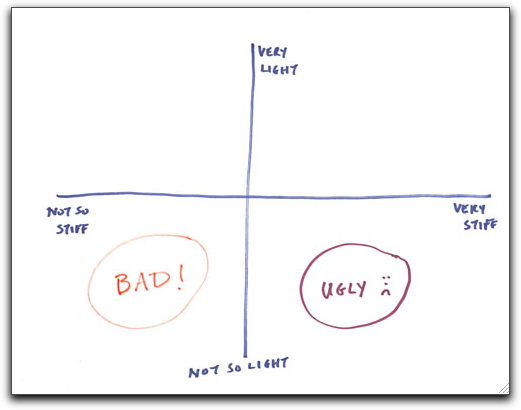 Now that I’ve eliminated bikes in the lower half of the grid, it’s time to take a look at the upper half. This is the world the bike media tells us is biking nirvana. In particular, every bike aspires to land in that upper right quadrant: the world of stiff and light. Read any review of a bicycle and you’ll find that references to stiffness (more is better) and weight (less is better) abound. This combination is indeed the essence of speed. Well….it’s perceived to be….. 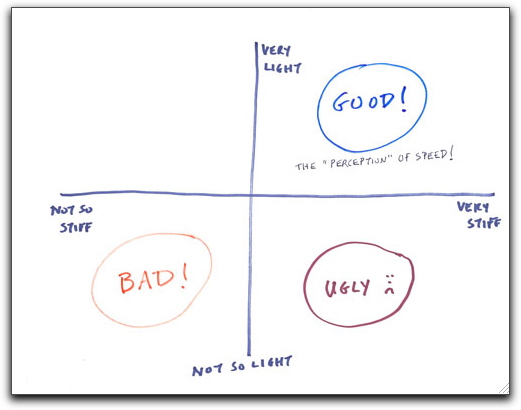 Still vacant is the upper left quadrant, where light weight bikes that aren’t super-stiff reside. In our quest for ever stiffer bikes, we’ve neglected this quadrant, but it turns out that it’s home to something we crave as much as speed: comfort. Are the two mutually exclusive???

Not only is the frame’s ability to absorb some road shock enhanced when it can flex, but it can also spring back and return energy to the drivetrain (i.e., help you turn the pedals).

Think about it. When you feel comfortable on your bike, you can usually keep riding strong for a longer time than when you’re not comfortable. The bike works with you. When I feel this way on my bike, I think of it as a harmony in which the bike “plays” the road like a musician might play an instrument. The road, the bike and the cyclist all contribute to the ride rather than working against each other. Yep, we’re all bouncing around, but the whole is greater than the sum of our parts, so to speak.

Recently, there’s been a revival of interest in this interplay of frame stiffness, rider comfort, speed and (ultimately) rider efficiency. While no one has yet to subject these anecdotal sensations to truly rigorous testing done across a broad sampling of riders, power meter testing with a small sample has verified that efficiency (I want to go fast, but be comfortable, too) is indeed rampant in the upper left quadrangle. So give it the respect it deserves!