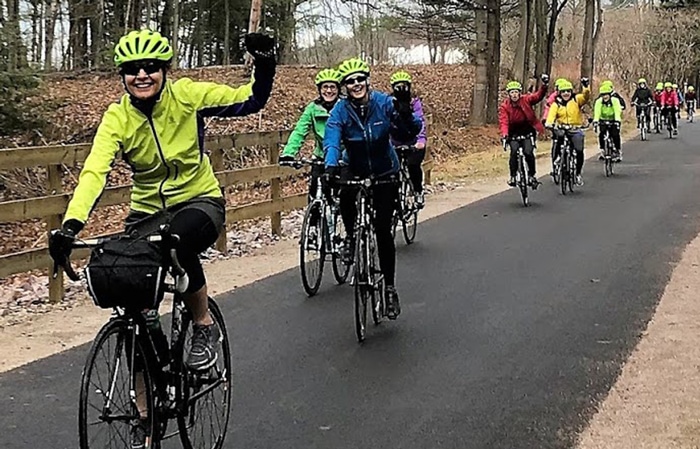 Another great night of the Wellness Revolution with Terry Bikes.

It ain’t just about the bling.

These are people who really want women to get out on their bikes, feel comfortable, feel confident, and make this a part of their everyday lives. Women who haven’t biked in ten years; women whose bikes have been sitting in a storage shed; women who don’t even own a bike helmet; women who couldn’t even imagine biking in the city.

So we started out with a welcome by Liz Robert from Terry Bikes, giving us the overall picture. In the crowd, big smiles, some nervous laughter, but deep down inside I’m sure each woman there nurtured a desire to break out, to get out on that bike. Even if it has been 10 years.

We were each fitted with a helmet, so no excuse for not feeling ready to go out and conquer. Especially because it was fluorescent yellow and we could be seen for miles. Kind of fun biking in this group of 30-some women and feeling like I belong to some cult because of these fluorescent yellow helmets. Believe me, cars take a wide berth. That’s a good thing. 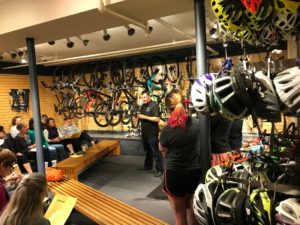 The following week, we had a Maintenance Workshop at Skirack. Again some nervous laughter, but then a more focused attention on our two instructors who took us through some of the nitty-gritty of popping a chain back on after it came off the sprocket, that dastardly event of changing a flat, educating us about what we should have in our little pack that rides on our bike: a patch kit, an extra tube, ID, some cash, even a glove to keep yourself from getting greased up if you’re doing some repair work. All of these recommendations, along with a compact pump to ride along on your bike can give you the confidence you need to feel like you can venture farther from home.

The confidence continues to smolder. 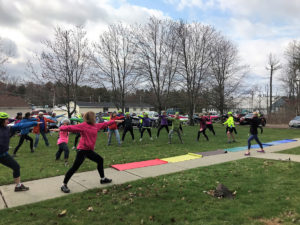 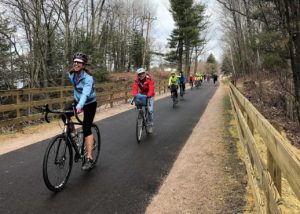 Then Saturday rolled around and our first group ride, and what a group! This included the Tuesday and Thursday night groups so we had about 60 women with our famous fluorescent yellow helmets. We actually started the day by going through some yoga stretching and some dancing out on the lawn in front of the Terry Warehouse. Stretches, warming up, that got us ready to leap on our bikes and head out on the bike path. As I rode along in this sinuous stream of women out on an early, somewhat raw Saturday morning, the sky threatening rain, it was uplifting to look ahead and see this long strand of wild women, all out to conquer a fear, a doubt they may have had, but were now working at putting behind them, surrounded by like-minded individuals, all doing the same. Bravo! 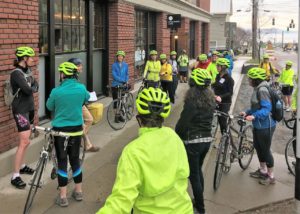 The next Tuesday evening we met at the Terry Office again for an Urban Cycling workshop. Jason, from LocalMotion listened to our fears, our concerns — and there were many — and gently but fervently explained how to handle each one. He had been doing this for years and was ready to show us how we could break through this barrier also. So off we went, wending our way through Burlington’s streets, slick with rain, but each of us heeding his lessons, implementing them, stopping to regroup, discuss, and then go out for more. We climbed hills, then turned around and headed back down, practicing our braking in such a way to afford much more stability, more confidence. Some who were so fearful before leaving the confines of the office were now sailing down a steep hill, positioning themselves farther back in the saddle, as he had explained, to maintain more control. Even smiling while doing it! Just beautiful!

I’m thrilled to be able to be a part of this group. I felt like I came upon this by chance, and I’m just gushing about each event that we have together. Well I may have been biking for years, in lots of different settings, but I’m still learning lots from each of these gatherings. I’m learning from the teachers, the mechanics, the bike advocates who are out there making life better for us.

But also, I’m learning from the women. Hearing folks murmur with a nervousness that is now subsiding. They’re asking the questions, they’re facing their fears. They’re doing it!

Thank you Blue Cross Blue Shield of Vermont, and thank you Terry Bikes, and to all the local bike shops, enthusiasts, educators, fanatics — and that’s a good thing! — who are partnering with them to get lots of wild women out on their bikes.

Watch out for those fluorescent yellow helmets. There’s no holding us back now.