You are here: Home / Sidesaddle Blog / From Georgena / Competitor Analysis

Competitor analysis. One of the fun things I’ve been doing as we get our Terry bicycle line cranking (no pun intended) again. It’s been a long time since we’ve had a presence in any more than a handful of bike shops and we’re on the way to changing this in 2010.

So my competitor analysis tells me things appear to be skidding around on the road a bit with respect to women’s bikes. In a nutshell, if you’re 5’2″ or shorter (and 8% of you are), you may be having a tough time finding a good fit on a bike. There are still a lot of women’s bikes out there with long top tubes and steep seat angles. Translation: “My neck and shoulders are sore and I keep pushing back on the saddle.”

At the same time, I’ve read about 3200 comments from customers we surveyed for their reactions to Terry bicycles. It seems like we’ve been doing a really poor job of explaining bicycle fit to the world. Ironic, since we’re the company that defined fit and created the women’s cycling market.

Wheel size is very much misunderstood — not just the 24″, but even 650 as well. And that seems to be manifesting itself in a shortage of bicycles using this size. Frame material is always hot. Carbon is pretty much universally the material of choice. Some love steel, some don’t. Titanium hovers in never-never land and aluminum is as pervasive as beer cans on the shoulders of a back country road in a state that never passed a bottle bill.

In a nutshell, there’s a lot of pressure on me to make our bicycles a little more mainstream so they will be more readily accepted by both dealers and consumers. I.e., dump the small front wheel: she’d rather be miserable on the bike than look odd on it (if she does indeed look odd). I guess I’m too much of an engineer to just say, “OK.” How can I look that petite customer in the face and tell her this is the best we can do? How can anyone, for that matter? 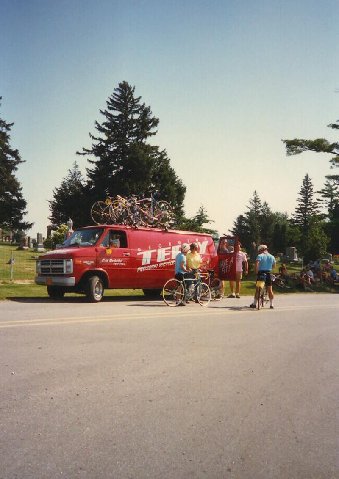 I recently read notes from a lecture given by Professor Eric von Hippel at MIT’s Sloan School of Management. He talked about “user innovators” (which I consider myself to be) and manufacturers. A user innovator develops a functionally novel design, like a women’s bike that really fits. A manufacturer takes that design and makes it more appealing — looks better, costs less, fits into their way of doing things, etc. Is it a better product as a result? Maybe, maybe not. But who’s going to tell you?

Sounds like we need to bring back the Terry van and hit the road. We have some teaching to do!