You are here: Home / Sidesaddle Blog / GIRLS BREAKING AWAY. 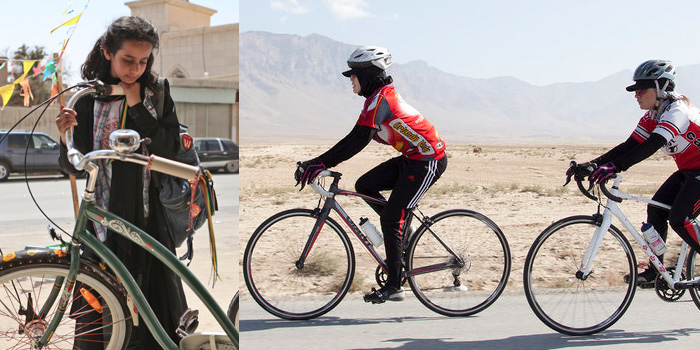 As we approach Independence Day here in the U.S. it’s a good time to reflect on liberties we enjoy. Among those are some we could easily take for granted without a reminder of how lucky we are to have them.

For example, in some parts of the world, the simple act of going for a bike ride is subversive, even a revolutionary gesture – if you’re female.

Two movies exploring aspects of this popped up recently, one in my Netflix stream, the other on the indie festival circuit. Both are well worth a closer look.

Wadjda is titled for its heroine, a young girl in the ‘burbs of Riyadh, in Saudi Arabia. She is feisty, resourceful, charming, and not remotely interested in being conventional.

When she sets her heart on owning a bike so she can beat her (male) friend in a private race, she meets obstacles at every turn. Finally she figures out a crafty path toward her goal.

A girl and her dream bike are at the center, but the story encompasses much more.

We see fascinating glimpses of life in Saudi, and a lot of the drama revolves around how the women in the film cope with the restrictions they face.

The movie skirts around criticism of the authorities that impose these limits, instead presenting them in a matter-of-fact way, while showing how women adapt, find accommodations, or gently subvert the system.

Wadjda is also interesting as the first feature shot entirely in Saudi Arabia – written and directed by a woman at that.

The journey is painful at times, but Wadjda brings an optimistic viewpoint to discouraging circumstances. Ultimately we see the uplifting moments of liberation and simple joy in riding a bike that we cyclists know and love.

The second movie also deals with the challenges facing women who want to ride bikes, but where Wadjda is fictional, Afghan Cycles is real life, and the stakes are much higher. 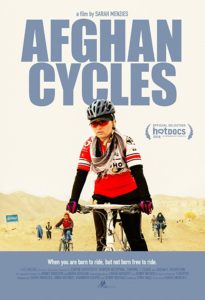 In Afghanistan, a woman on a bike is defying a host of cultural norms and religious edicts. She does not just face disapproval, but also abuse, violence, even death threats.

This documentary reveals the remarkable young women who dare to ride in spite of daunting opposition. They are staging a different kind of revolution, mile by mile, on carbon frames and racing slicks.

It’s easy to understand why the Afghan women’s national cycling team dissolved under the Taliban’s rule. When the team was reformed more recently, and its riders overcame all the difficulties you might imagine to compete internationally, it was nominated for the Nobel Peace Prize.

Sadly, the national team folded again. Several star riders were able to use their accomplishments to find asylum abroad. The team remaining collapsed under the weight of corruption and mismanagement.

In spite of this, young women all over Afghanistan are discovering the power of cycling and finding ways to embrace it. Girls are forming cycling clubs without any knowledge of others, or of the national team.

The film’s producer makes the point that the roadblocks cycling women face aren’t really because of religion or culture, but because they are women. In this respect, Afghan society is at the place much of the rest of the world was a hundred years or more ago. Riding a bike was among the most outrageous things a woman could do, but the mobility, independence, joy, and healthfulness of cycling can improve women’s lives immeasurably. These women feel that, and so they ride in spite of all.

As their revolution takes hold it can’t help but move their country forward too.

Read more about the movie Wadjda on the New York Times. It is on DVD and streaming services. Afghan Cycles was showing at festivals in early 2018 – look out for its wider release.