You are here: Home / Sidesaddle Blog / HOW TO PREVENT DOG ATTACKS – A GUIDE FOR CYCLISTS. 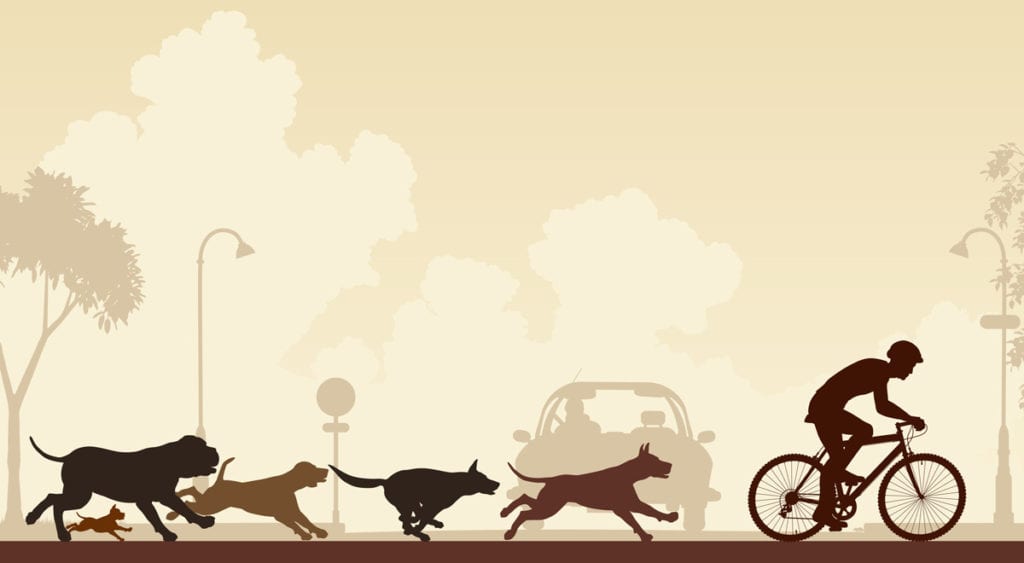 How to prevent dog attacks on or off the bike

A cautionary tale, with tips to help cyclists avoid attacks from dogs they approach

Lisa Wilkes, Terry customer support lead, was on her bicycle, wearing a helmet, sunglasses, and cycling gear when she stopped in to see some friends who were out in the driveway of their home. When Lisa rode down the driveway to her friends’ garage, she saw their dog, a 10 year old boxer she had met once before. The dog approached Lisa, and thinking that he’d recognize her, she bent down to greet him.

That’s when he lunged at her, biting her face. Fortunately, Lisa recovered well. When I met up with her almost a year later, I couldn’t see any traces of the attack until she pointed them out to me. But we were puzzled: why had the dog bitten without any warning? I reached out to Meredith Lunn, a Certified Dog Behavior Consultant and AKC CGC evaluator, to see if she could provide some insights and advice that might protect other cyclists in a similar situation.

After interviewing everyone involved, Meredith identified three possible triggers for this dog attack:

Dogs almost always give warning signals when they feel uncomfortable. They’ll avoid you, or growl, snarl, or air snap to ask people to back off, and only progress to biting when people continue to invade their space. Meredith urges people to be sensitive to these signals, and suggests several tips to avoid dog bites:

The good news is that for the most part, dogs don’t make unprovoked attacks. They’ll bite only when they feel uncomfortable and can’t get away from the threat they perceive. As a cyclist who may find herself crossing an unfamiliar dog’s territory, take a moment to think about how the dog might see you and adjust your behavior accordingly. Don’t assume either that every dog loves you, or that every dog is a threat. Instead, stay safe by giving them space and time to adjust to you and decide for themselves that you’re not a threat.

Ever been chased by a dog when you cycle past its home?

Sooner or later every cyclist will encounter a dog “defending” its turf, playfully or aggressively. Either way it is an unpredictable and scary situation, and it’s best to be prepared ahead of time with some defensive strategies to prevent a dog attack, or reduce the risk of being bitten.

Having said that dogs don’t make unprovoked attacks, they are predatory animals, and can react to things going by them quickly – like bikes. Whether their instinct is to herd it or attack, they want to chase the fast-moving object. Cyclists and dog behavior experts recommend the following:

Good luck out there!