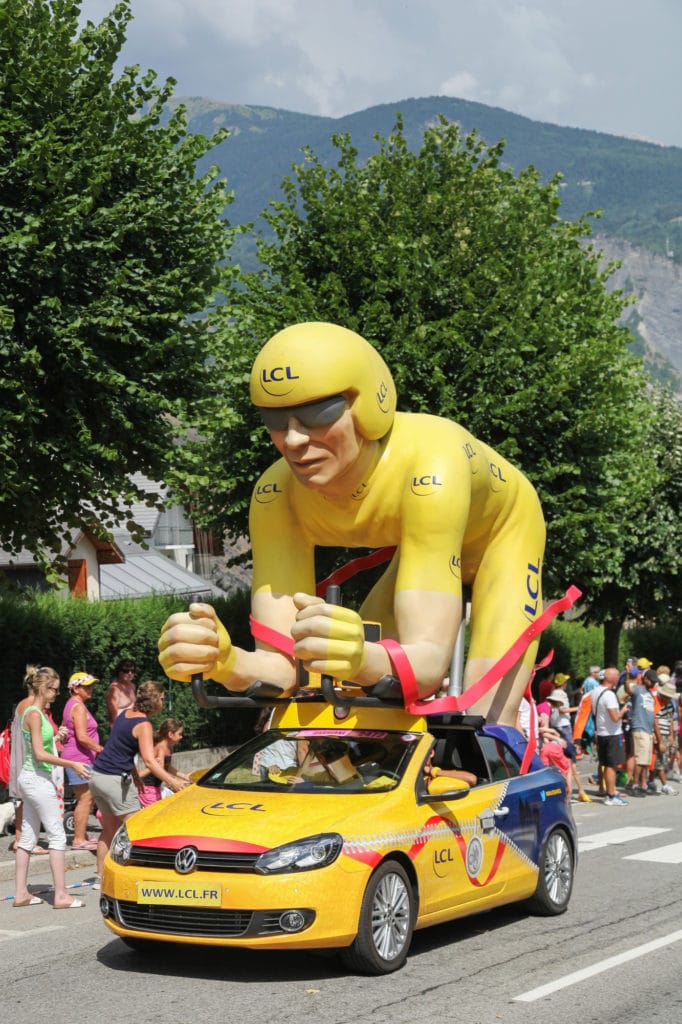 The Tour de France Caravan – The Other Greatest Spectacle In Sport.

There’s a side of the Tour de France that people watching highlights on TV or streaming the race might never see: La Caravane Du Tour. Only the spectators who put up with all kinds of inconvenience to watch the race flash by in person get to fully appreciate this aspect of the Tour.

It’s the Tour de France advertising caravan – a pre-race party parade that follows the route soon to be ridden by the teams. 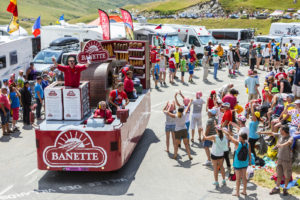 A convoy of around 200 gaudy, oversized floats makes its way through towns and fields, along lanes and highways, and over cobbles and mountain-top passes. Wherever the race goes and spectators gather to watch it, the caravan passes by to warm up the crowds and do a little brand-building. Floats feature every imaginable kind of product with giant characters and personalities in effigy. Foggers pass by spraying spectators with a cooling mist; along with visions of candy, cheese, biscuits and toothpaste, cartoon characters, celebrities and cultural icons. 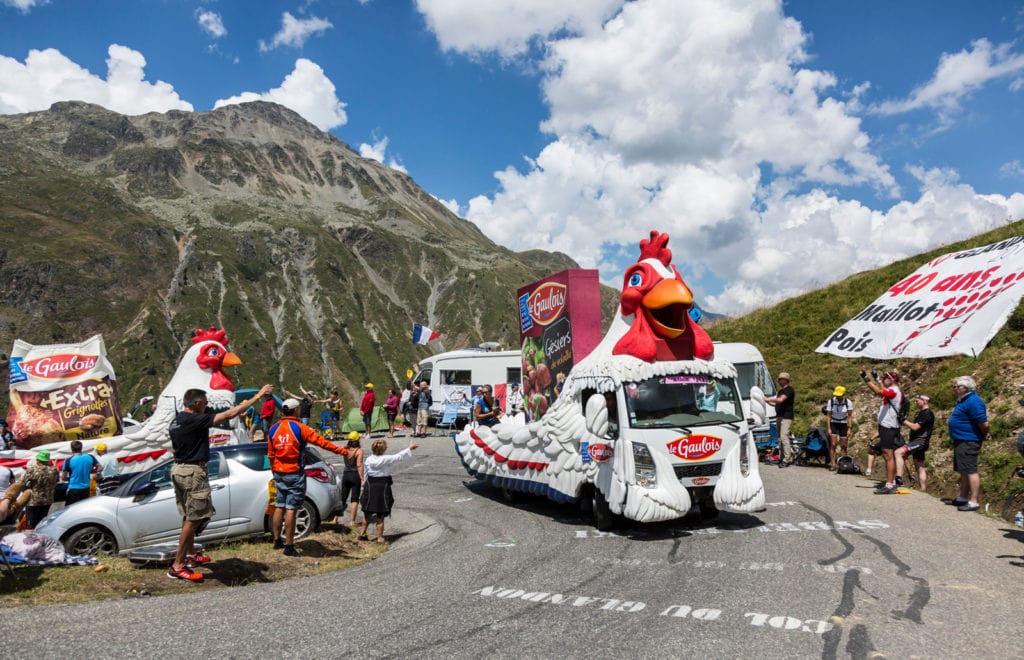 It all started when the tire manufacturer, Wolber, handed out postcards along the route, back in 1924. Soon chocolate, alarm clocks and shoe polish were promoted along the way, and in 1930 the organizers recognized the opportunity as a way to pay the increased costs of staging the Tour with a new national team format that required them to equip and support the teams and riders.

It’s a golden opportunity for advertisers, with around 12 million people lining the Tour de France route, ready to be entertained. 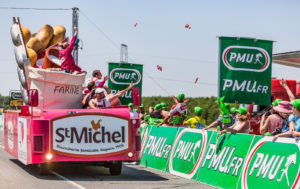 In 1935, 25 brands participated. The numbers increased every year, reaching 219 in 2006. The Tour de France caravan is around 20 kilometers long, and takes around 45 minutes to pass by. In 2016, 14 million samples, coupons and gifts were handed out along the route.

The organizers started to limit the numbers for safety with around 180 participating now, and enforce strict safety specifications for the vehicles.

The Tour de France caravan may provide a different kind of spectacle than the struggles and competition of the world’s greatest stage race, but race fans love it almost as much. Some people follow the caravan from stage to stage for days at a time, and organizers found that almost half the spectators arrive early specifically to see the caravan pass by. 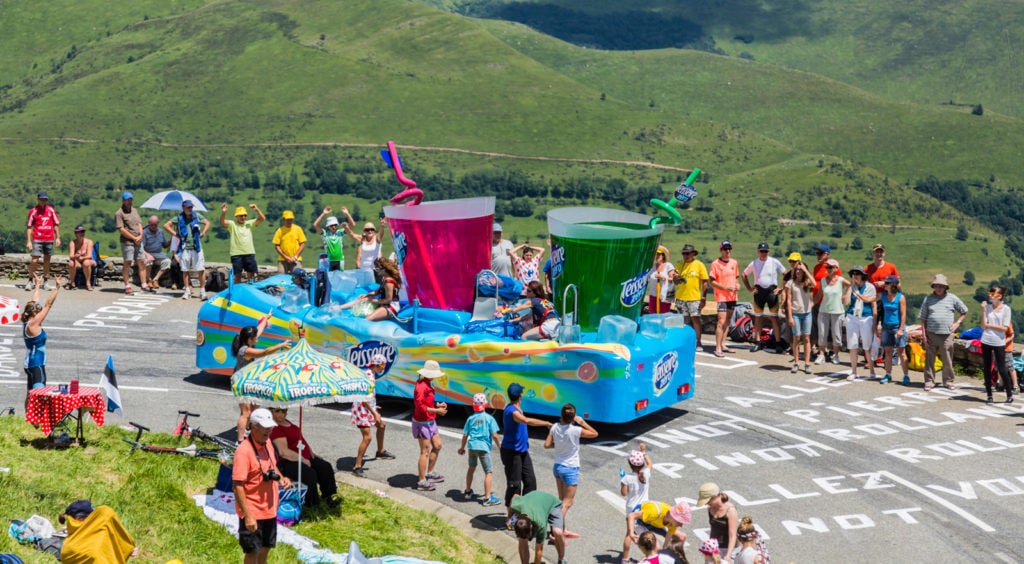 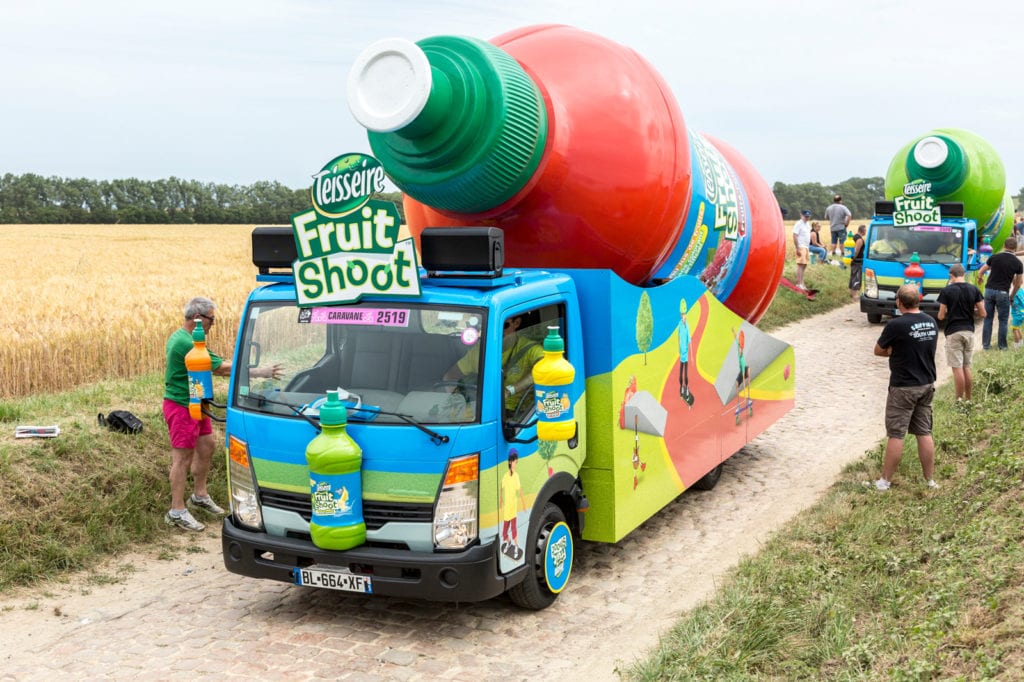