Whatever happened to the Women’s Tour de France?

When National Public Radio runs a story about the Tour de France it’s unusual enough to make us perk up our ears, and appreciate the exposure for our sport. When the coverage is focused on a group pushing for a women’s Tour de France, we really pay attention.

Their recent story followed a group of women drawing attention to their demand for a full Women’s Tour de France.

Known as J-1 – which stands for Jour minus 1 – the group of 13 women, with support staff and vehicles, and around 400 supporters who join in along the way, are riding the entire Tour de France route, one day ahead of the men. Their progress is a lot slower of course, as they contend with traffic and inconvenience. They do not compete to win, but aim to show that women can complete the same route as the men.

The NPR coverage adds to a lot of media stories this year, asking why there is no women’s equivalent to the Tour de France.

There is la Course, a one day event raced over part of a TDF stage, and organized as part of the Tour de France.

This year’s la Course was among the most exciting ever, with a nail-biting duel fought over a major climb and perilous descent, with a last minute surge to snatch the win. It showed that women’s bike racing delivers just as much excitement and drama as men’s racing.

The 10 day Giro Rosa is already well established as a women’s equivalent to the Giro d’Italia, and together with high profile pro women’s stage races in the UK, US and Australia proves the formula can work with the right support.

It’s not that the idea of a Women’s Tour hasn’t been tried. Digging into the background of the various events that have so far filled in as the Women’s Tour de France, it’s clear that there are a lot of obstacles to overcome to stage a major Tour de France equivalent, even beyond the often cited issue of sexism among the Tour’s and sport’s governing bureaucracies. 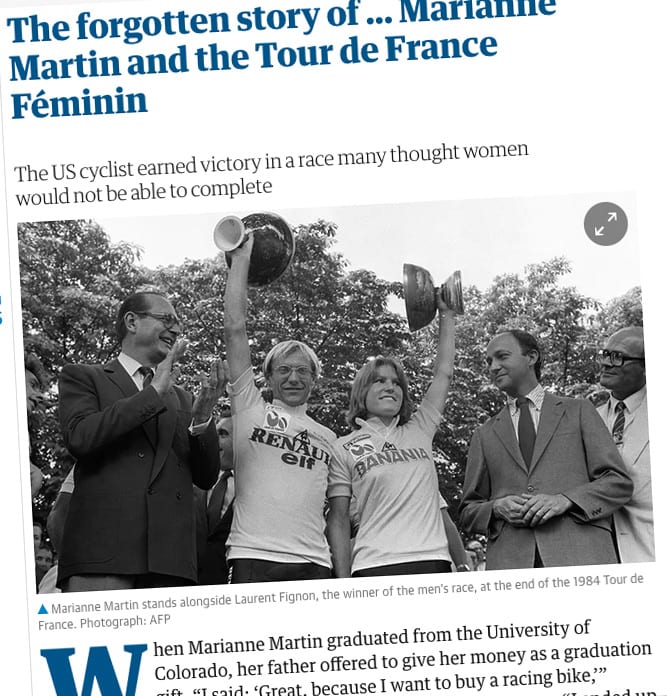 Back in 1984, the first Tour de France Féminine (Women’s Tour de France) was won by American rider Marianne Martin. It was a curtain-raising event for the Tour de France, by the same organizers, and actually lasted three weeks, ran over the same course as the men’s race with modified stages, earlier in each racing day.

Even then it was a shoestring affair, with not nearly enough support or exposure, but it was a close equivalent of the men’s race in length at least.

Marianne Martin’s team mate tells amusing stories of her experiences, like traveling in a delivery van filled with chocolate sandwiches.

That version of the Women’s Tour de France was reduced to two weeks after a couple of years, and slowly dwindled through a name and format change until its last year in 1989, when political and organizational problems added to the difficulties of securing sponsors and media coverage.

In 1992 a separate organization tried to create the missing Women’s Tour de France as the Tour Cycliste Féminin. Another name change was forced in 1998, when the owners of the Tour de France enforced their copyright on the word “Tour.”

It was an enormous struggle to find sponsors and cities to accommodate this version of the Women’s Tour de France. That made awful conditions for the riders, with extremely long transfers, not enough time for sleep, cramped and difficult accommodations and transport.

Prizes went unpaid, and were pitifully small to begin with.

As the Grande Boucle Féminine Internationale, the race continued until 2009, gradually succumbing to the same list of problems as its predecessor.

Even so, the standard of racing has been increasing and the showcase of exciting, hard-contested women’s races has helped fuel the demand for full equity.

At last the state of professional women’s sports and public enthusiasm for them seems to have reached a new level, and the people running the events and sport’s governing bodies are being cajoled or convinced to get on the same page.

The head of ASO, Tour de France’s owner and organizer, recently said that a standalone women’s tour is almost inevitable, “and the sooner the better.”

The French president of the International Cycling Union has said he wants to witness a women’s Tour de France before his tenure ends in 2021.

Many are calling for a return to the original format – the women’s race staged along the same course, with modifications, run earlier in the same day. Others would like to see a separate event, Giro style, with 7 to 10 stages over similar routes to the main TDF.

The difficulties seem the same as ever – sponsorship and media attention. What seems different now are attitudes to professional women’s sports, and voices within the organizing bodies responding to the complaints of the athletes and the gentle demands of activists like the women covered by NPR, riding the TDF route one day ahead of the men.

Crowds already lined up along the route cheer for them, just as for the men the next day.

As one of the riders, Tetiana Kalachova, said in the NPR piece: “When you come to the mountains, you climb, and you have all these people cheering you up, believing in you. And even if though you don’t have any more force, you just push on. You just stand up and finish that. So it’s enormous source of energy. It’s a great feeling.”

Surely a sign that riders competing in a Women’s Tour de France is a spectacle people are eager to see.