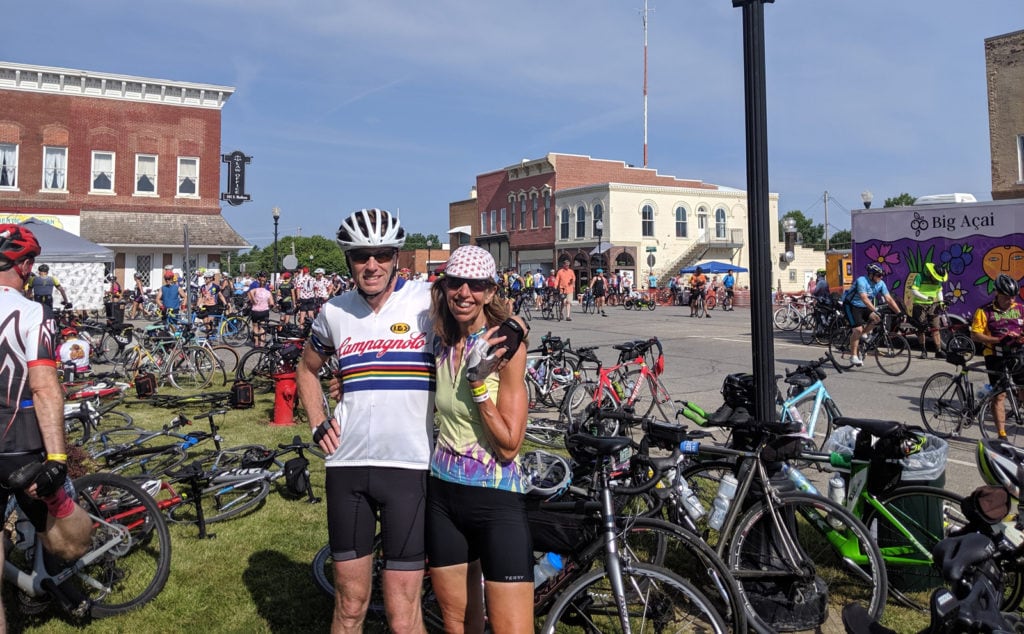 “Anyone who has ever gotten on a bike should come to RAGBRAI.”
– From a 79 year-old cyclist riding in his 43rd RAGBRAI.

“Everybody’s Ride.”
– From a Dad on a tandem with his 12 year-old daughter.

“You don’t love it, you don’t hate it, you just live it – and then you fall in love with it.”
– Jeannette Segale, Terry Bicycles Bike in Bliss Ambassador 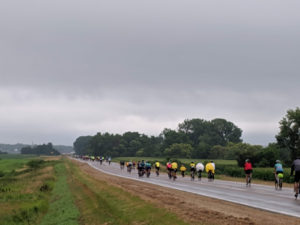 Headwinds, tailwinds, side winds; thunderstorms, heat, and humidity. All 12,000 plus cyclists are facing this together. Knowing this makes the miles of pedaling (and eating) across Iowa easier.

Occasional music from portable iPhones and speakers inspire riders as we grind up and over the frequent rolling hills: Bob Marley’s “People don’t worry, ’bout a thing, ’cause every little thing’s, gonna be alright,” and Pink Floyd’s “All in all it’s just another…” and everyone together shouts “Brick in the wall!”

The rolling hills appear to be alive in the distance, as thousands of cyclists make the roads morph into a large crawling caterpillar on wheels. Frequent Hills – my husband calls them Friendly and Frequent. I call them Frequent and Ferocious.

This is the forty seventh year towns have hosted the ride across Iowa, which originated with two cycling journalists from the Register newspaper.

Each year the ride grew until it’s now capped at 12,000 registered weekly riders. However, estimates are anywhere from 15,000 to 25,000, as riders hop on to join for a day, or several days, and state highways are closed to motor vehicles. 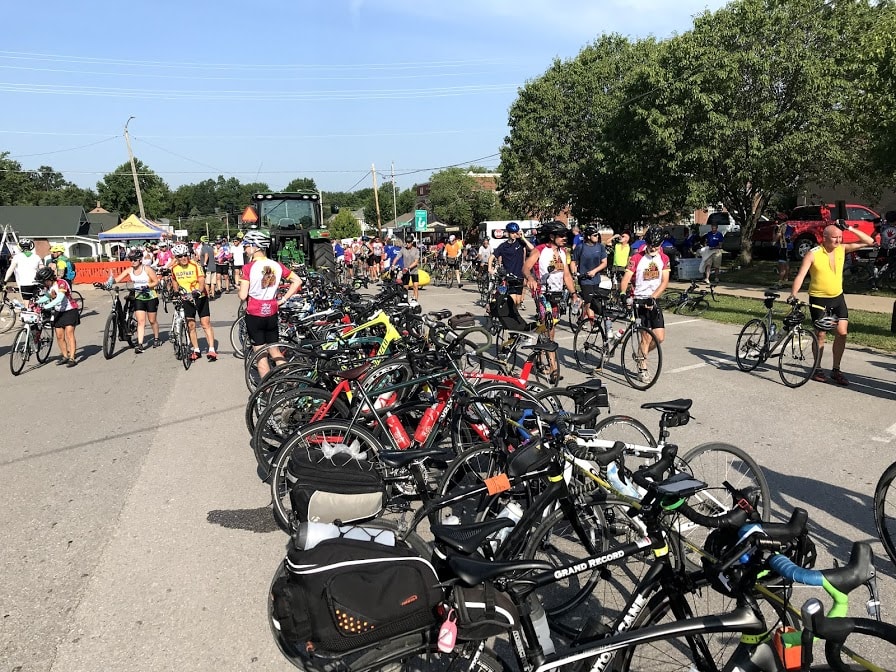 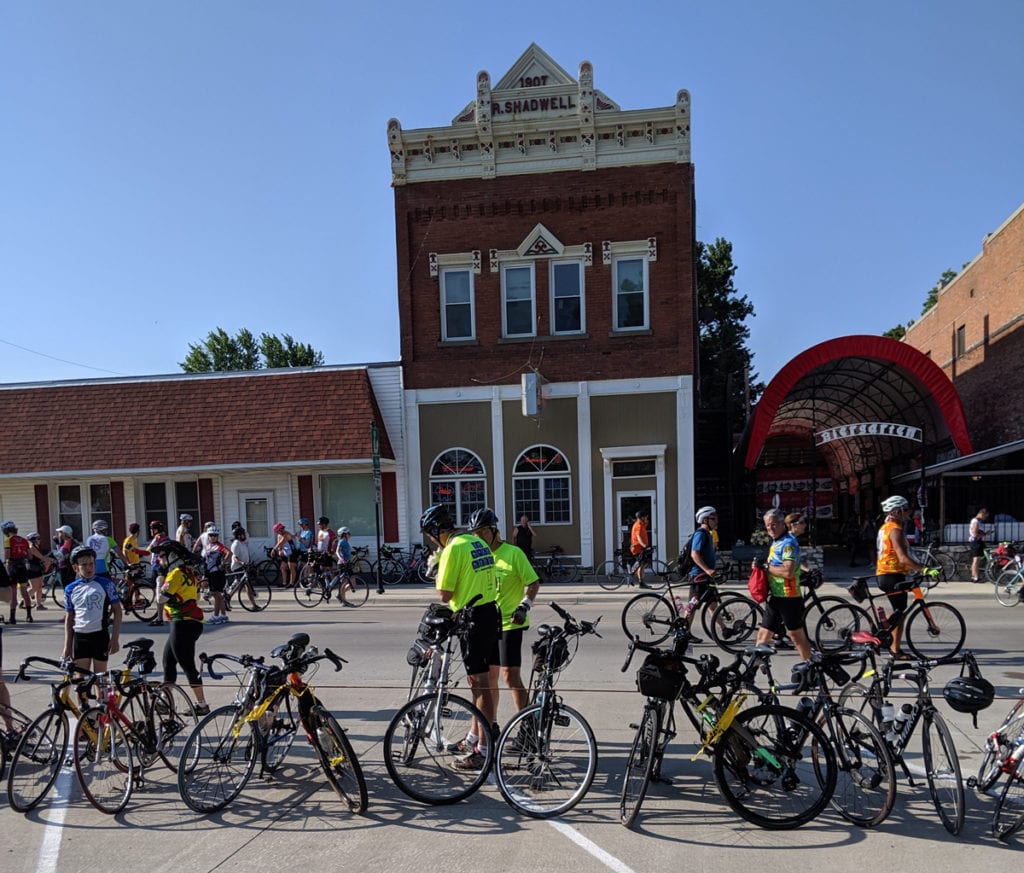 Each pass-through town (about every 6 to 12 miles) seems to try to outdo the previous town in welcoming weary cyclists. In Daud, (Yabba Dabba Daud!) riders are welcomed by Wilma and Betty Flintstone, complete with a functioning Flintstone Mobile.

Sprinklers, Bike Sculptures, Bike Trees, and historic buildings form an entertaining back drop as Boy Scouts, Swim Teams, Booster Clubs, Firemen, and all the friendly people of Mid-America turn out to raise funds for a variety of small town needs.

Many Terry Friends along the way. 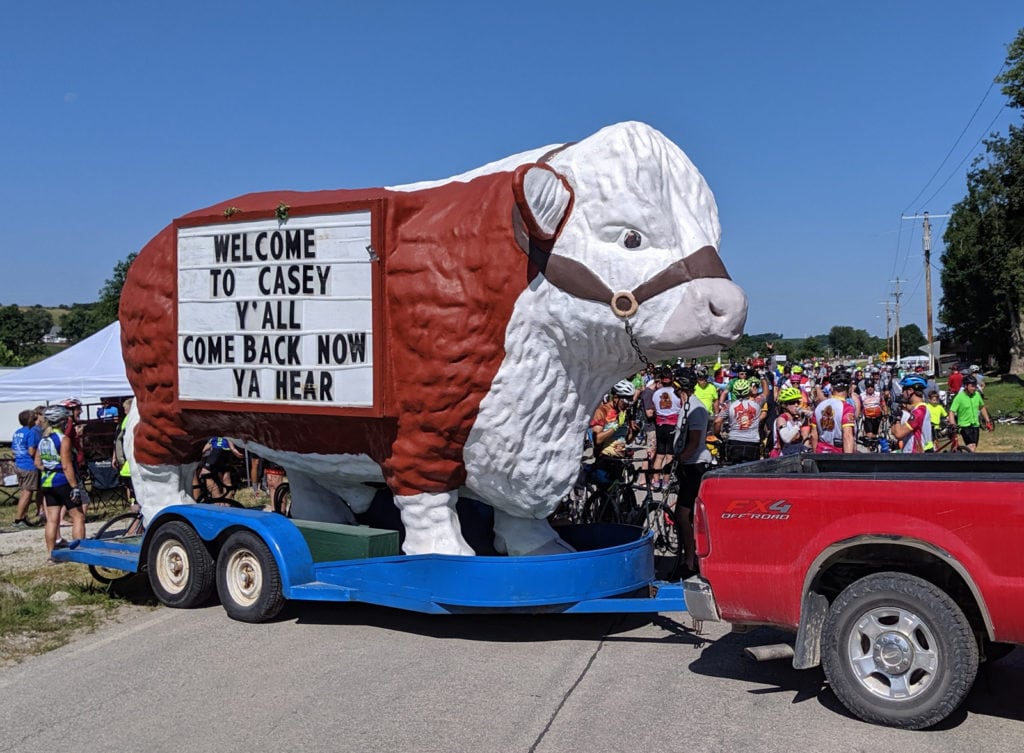 “Eat a slice of pie and help us build our grandstands!” 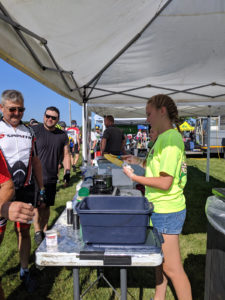 Each year a different route and a different set of towns reap the economic rewards as thousands of hungry, thirsty riders swarm their roads like a plague of locusts. I do my best to help. However, I have yet to try the peanut butter and jelly sandwich…with banana, strawberries and chocolate…on home made bread…grilled, as I just didn’t have enough room after consuming the Bacon Lettuce Tomato Cheese and Mayo sandwich on “thick hand-made” bread, which benefited the local high-school swim team.

Cyclists nosh on freshly baked pies as Amish Families hire local farmers with pick up trucks to haul their mobile ovens to sites alongside the route. These hard-working folks set up at 4:30 AM and begin baking pies: peach, raspberry, apple, blackberry, strawberry rhubarb — so many flavors and not enough days to try them all. I have to say: my peach pie savored alongside the corn and soybean fields was quite heavenly. 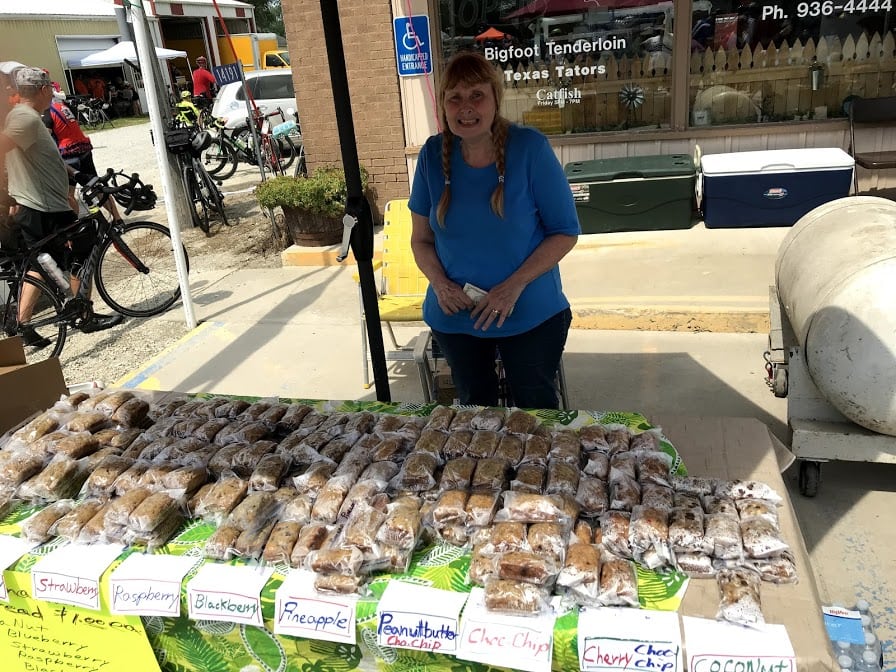 Iowans do this ride up right. We’re informed that there is a RAGBRAI book over a foot thick with everything towns and the state have learned over time about accommodating this one hit wonder of an onslaught of humanity. Expect lines, but know that every pie server, sandwich maker, smoothie dude, and Mr Pork Chop griller have the fastest method available to keep lines moving fast, and bellies on overflow.

A typical day starts at 5AM. The 6AM bugle calls resonate across the fields as tents are broken down and loaded on tractor trailers. Lines begin to form for coffee, breakfast and port-o-lets. Lipstick sunrise creeps up over the cornfields as silhouettes of cyclists pedal along, shadows following. Pedal through small towns to final destination of different overnight town about 70 miles East. Pull into camp late afternoon, bellies on empty even after BLTs, pork chops, corn, pies, ice cream and burritos. Locate a shady site if you’re lucky. Find your camping gear and baggage from among 1,000 plus other bags. Set up camp. Eat, Sleep, Repeat. 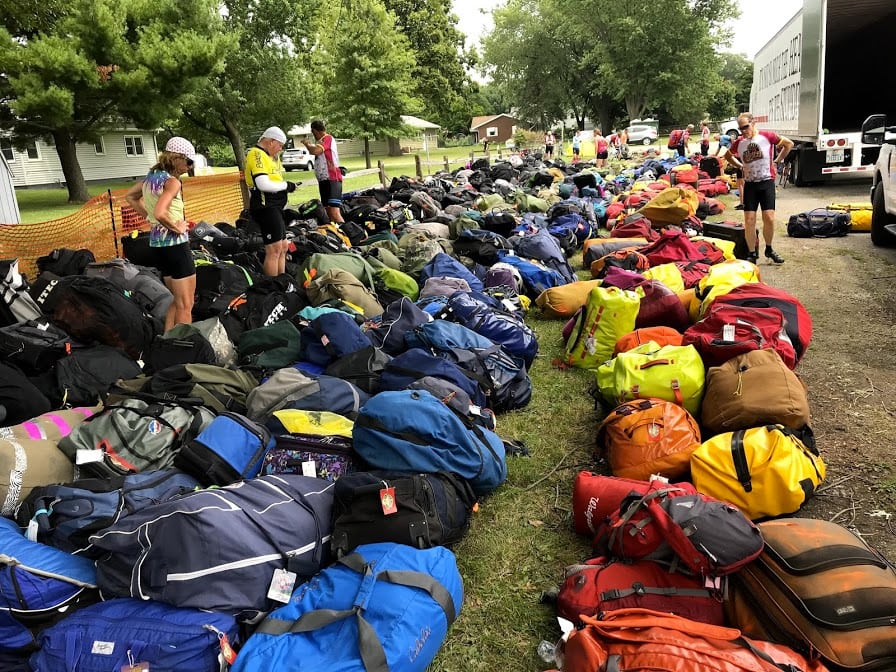 Numerous repeaters. One guy on his 43rd ride. What keeps you coming back, I ask. “This…” I look around with him at the hundreds of clustered tents and bikes; we listen to the sounds of the tent cityscape; quiet conversation, tent zippers opening and closing, mattresses being blown up, and snoring as the sun melts red, purple and blue beyond the cornfields. 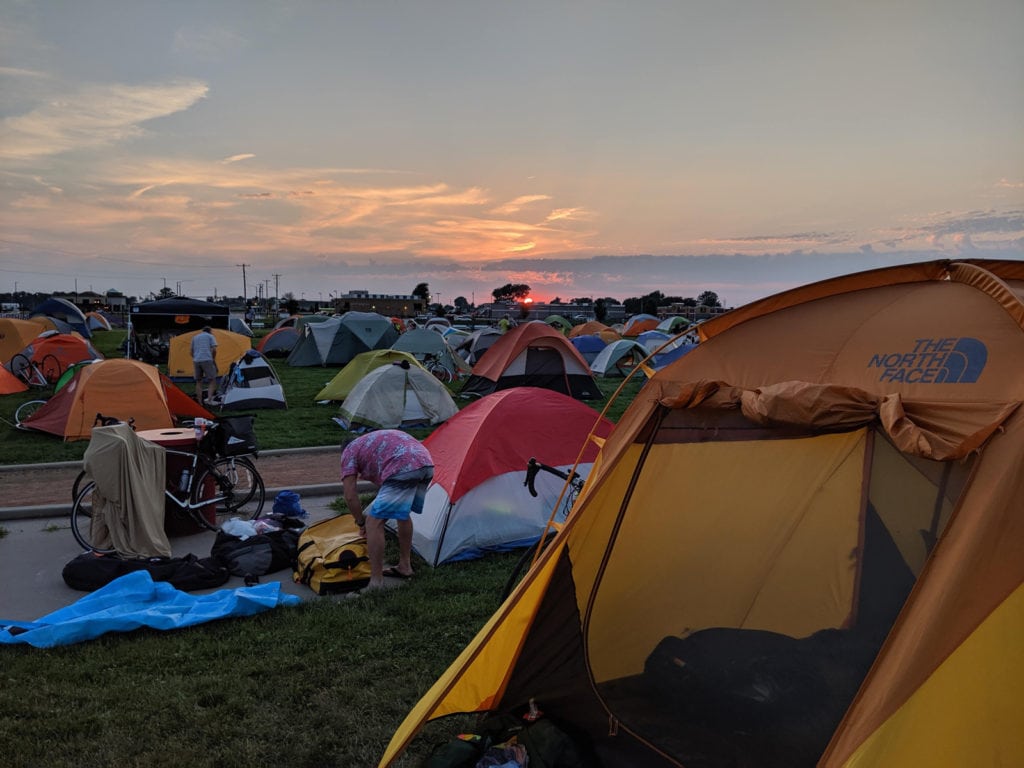