A formula for living to 93. 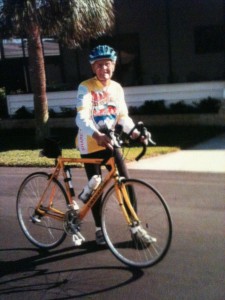 Although I have known my father for my entire life, I just learned the saying “Ride now, act old later” from him a month ago. He owned a t-shirt with that saying…and upon reflection; I realized that he truly led his life based on that motto.

His life was an anthology of adventures…of watching the Hindenburg minutes before it exploded, of getting out of Pearl Harbor in time before the strike, marrying the love of his life and having two daughters with her, dodging dogs trying to attack him while he was on his bike, outliving his identical twin, facing cancer, getting TWO tattoos in his 80s, learning to text message, and finally, learning what it means when one’s body has had enough.

My father was diagnosed 70 years ago with anxiety and it is miraculous that a Doctor in 1940 suggested that exercise would be the cure for him, but that’s exactly what he did. So, similarly to Forrest Gump who used running to relieve his emotional pain, my father cycled.

My father’s cycling became his life. It was his religion, his medicine, his mental conditioning, and his solace. He biked mile after mile often with complete strangers who became his family when his real family was hundred of miles away. His idea of heaven was a hotdog after a 50-mile bike ride and a clean rest room before he turned around and cycled back home. His standards were high for himself but his genuine love of life allowed him to enjoy even the smallest of details. And how did everyone know that he was happy? He gave them the thumbs up. And a big smile. He didn’t have to say anything; he just stuck his thumb up in the air and everyone knew it was all ok.

My father recently told me a story about when his heart defibrillator went off for the first time – he was traveling across Tennessee as the Grand Marshall of a bike ride when “BAM”…it hit him. He fell right over with the shock of it going off. And he lay there for a second on his side, still clipped in…frozen. Everyone who saw him fall cycled up to him screaming, “are you ok – Ken, are you ok?” And he didn’t move a muscle, except for that thumb which made its way up into the air to let everyone know he was just fine.

My father passed away peaceful this month surrounded by his family and with his favorite cycling t-shirt on…he made it to 93 years. We all thought he would live to 100. And perhaps that is now his legacy; he has given us all the recipe for how to live to 100…eat well, exercise and keep that thumb up.

Rest in peace Ken Magyar. Thumbs up to you.

Amy Magyar is a Derailleur.  She helps her clients across North America change their gears, their pace, and their direction.  She is the essential piece of equipment to get you where you need to move forward at a different pace and with a different power.  As an industry veteran and a Certified Performance Coach, Amy works with individuals who are athletes, were athletes, or wish to be athletes, on navigating change.